This service is provided free of charge to those eligible to receive it – for example those who have received a Certificate of Vision Impairment (CVI) and who may be registered visually impaired with their local authority.

We are part of a national group, the Talking Newspaper Federation, an umbrella organisation that represents the interests of local talking newspapers in the UK. Our talking newspaper (TN) is run entirely by volunteers and exists thanks to their dedication in ensuring that the TN is recorded and dispatched to listeners weekly. We endeavour to match the right person to the right role and ask volunteers to recognise their commitment to issuing our talking newspaper each and every week. 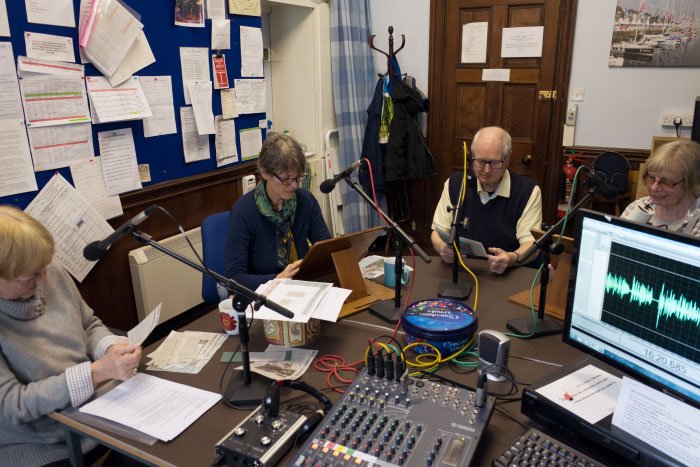 Derek Hodgson started the TN in 1984, with a grant from the RNIB. The first cassette tapes were recorded in a cold, draughty room, which was part of the old Otley Cycle Club premises on Crow Lane. They only had three microphones, a mixer, a recorder and a copier, which produced just two tapes at a time. There were 45 listeners.

Over the next 25 years, led by Stella Murdoch, the TN moved to a heated studio in the local Methodist church. There was also another move: from cassettes to CDs, and then in 2013 to USB memory sticks. As the number of listeners grew and the technology improved with the new formats, we were able to add more content and improve production quality.

Every week (except at Christmas!) a group of volunteers gather to edit, read and record the weekly talking newspaper from that week's local printed newspaper, The Wharfedale & Aireborough Observer. Also included are stories from the free paper, The Wharfe Valley Times, and we include radio listings taken from the Radio Times.

Every other month we record a cornucopia of articles, anecdotes, news, poetry and jokes, featuring content from publications such as Country Living, Dalesman, Saga and Yorkshire Life.

Otley Matters, the Council-produced information paper, is read by our local councilors every few months.

On every recording we add items produced by Infosound, an independent charity that distributes free information in audio format for vision impaired people on subjects that directly affect those living with sight loss.

And all of the above fits nicely on just a single USB memory stick.

When the recording is complete the master memory stick is checked, copied and dispatched in reusable wallets to our listeners via the Post Office, and our listeners get their audible version of The Wharfedale just two days after the paper copy hits the streets.

The TN is grateful for the financial contributions made by individuals and organisations that allow us to continue to provide the weekly talking newspaper free of charge to blind and vision impaired people. These donations are used to pay for equipment such as audio players for listeners, USB memory sticks, posting wallets and the technical equipment needed for the creation and duplication of the recordings.

Over the years we have received support from many of our listeners, their families and friends, and from so many other people through collections at supermarkets and local community events. We were delighted to be Sainsburys' Charity of the Year in Otley in 2016 and 2017, which has helped us to fund the continuing costs of introducing new technology.

If you would like to make a donation please send a cheque (made payable to Otley & District Talking Newspaper) to the following address:

If you know someone who is registered blind or partially sighted and who would like to receive these recordings in the mail do please contact us or complete our subscription form. In most cases an MP3 player can be provided free of charge for those who do not have one of their own.